← Sligo Salmon
In Search of a Seven →

What strange weather for fishing as a whole we have experienced so far this year. It started off in glorious sunshine and warmer than usual weather in March, then April and May really were significantly a lot colder and wetter than usual. I had a carefully planned itinerary for the year targeting various species and waters, but that all went out the window as my planned attack had to be rethought.

My first port of call was for the bream, but as March was so warm I feared they might spawn early.  However the cold weather of April put the blinkers on that, and I saw a window of opportunity for May to do a serious pre-baiting session and hopefully nab a couple of big ones before they did the deed on a massive wild Irish Lough. 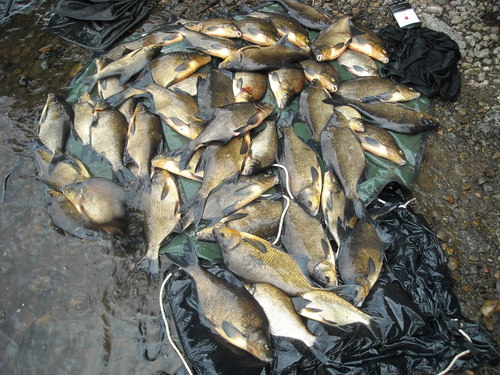 My plans seemed to be going well at first, 2 weeks of hard graft with a fishing pal, which saw a lot of miles put on the clock and a small mountain of bait distributed to the said water. Every third day we would boat out 30-40kg of various goodies, from flaked maize and ewe nuts, to catering cans of corn and prepared bird-food or as the uk carpers call it parti-mix, plus the usuals like dead maggots, pellets and wheat.

This was distributed in an area the size of a tennis court where I know the bream congregate before spawning. Things looked good as bream were seen rolling in the evenings in our chosen spots as we piled yet more bait in, which showed us we weren’t wasting our time, or so I thought.

We planned a 2 night trip over a weekend, as I cant just up sticks and leave with kids and work commitments. Sods law saw the hottest 3 days of the year and the hundreds if not thousands of bream went into giggidy giggidy mode and wouldn’t look at a bait no matter what treat we had prepared for them

We did observe them from a boat as they courted each other right underneath us oblivious to our presence, but there wasn’t a hope they were going to be caught, so we cut our losses and let them have an early night. 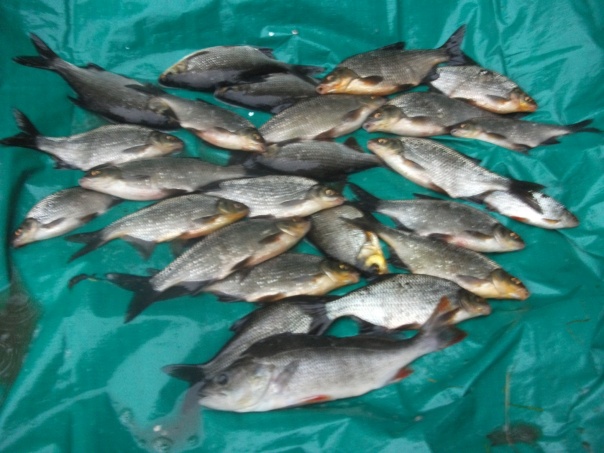 I did have a cast for them the following week for a couple of hours, and had a few hybrids and a very welcome 2lb9oz perch, but the bream had moved off out of the area, most likely to a nearby river to clean themselves after spawning. Surprisingly, I had never caught a roach or hybrid in this water up until 3 years ago. It was bream after bream. The make up of the lakes biodiversity is obviously now changing since the roach introduction 8 to 10 years ago and they have made their mark, but hopefully the bream which do grow large there will still be available to anglers in years to come.

After all the massive pre-baiting sessions, I decided to head for the Tench which are my favourite of all the warm weather species. I did some trips to local lakes and did bag up on loads of fun sized tench but it’s the bigger ones I have been after over the years and some the richer less populated lakes of Leitrim were on my list of targets this year.

Although the tench are one of the most frustrating fish known to man, there is something special camping up on a lakeside and getting up at 4am to watch nature wake up and see the mist or more recently rain on the water as the tell tail signs of tench feeding by the fizzing bubbles they produce as they scour the lake bed in search of their breakfast.

This can also be the most nervous of times too, as bubbles get closer to your float then head in a different direction and it’s a mind game of stick or twist as whether to follow them or keep your nerve. The latter usual works better for me if I feed properly and have my float set up right.

I usually couple the float rod with a ledger rod on the alarms to give me the best opportunity. On the sleeper rod I usually use a method feeder or a black cap maggot feeder with short hooklinks and either fake corn or fake castor hair-rigged for self hooking. On some of the weedier water I fish this also helps with presentation and sometimes helps with hooking as the buoyancy of the rubber bait and the weight of the hook make it more natural than plain old baited hooks, and less conspicuous on wary fish, and the bait is in their mouths before they now what to do with it.

A few spods of chosen bait are put over the area I fish as opposed to the hundreds I would use for bream if we didn’t have the use of a boat. I like to use castor, pellets, dead reds and hemp for my tench although I never leave home without the trusty can of sweetcorn.

Some people really like to pile the bait in for tench, but on some lakes I find this can put them off and I like to fish for a bite at a time when they are finicky. No doubt both methods work, but if the tench are not in large numbers I try and sit on my hands and keep the bait bowl as far away as possible and just give them enough attraction and food for one to slip up. But as always all lakes differ and tench never read the rule book. 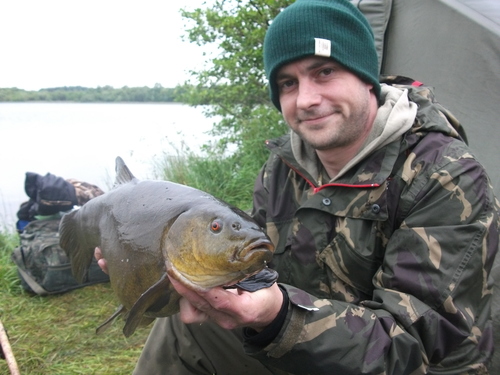 Again the rain has dictated the spots I could fish as a lot of lakes are flooded and unfishable, so some homework and guidance from some good people has seen me get onto a couple of waters to get some action from the tincas. I haven’t broken any records but have had some very respectable fish and would you believe it some bream when I wasn’t fishing for them. Ah well, beggars can’t be choosers.

As some of my fishing trips see me galavanting around on my lonesome, the dilemma of taking pictures for this article arose. Now I know there are experts in the field of self taking pictures but I am only scratching the surface this year with it. This coupled with the fact that I have a digital camera that only allows me a ten second delay when using the timer saw me in some funny moments. However I have managed to get a couple of pictures that just about did the job.

I use a screw in adapter that goes into the base of my camera, then screws into a bank stick, and all for the princely sum of a couple of euro. Next is to get yourself into the frame as best you can and to choose your background, (which is vitally important for all those secret squirrel specimen hunters).

I take a pic of me holding a pretend fish which a lot of the times is very optimistic looking on my part, then mark your spot with further banksticks so you know where you are meant to be for the all important money shot.

Anyway I was out this morning and put this into practise and as you can see, the fake fish is a lot bigger than the real thing, but I was happy with the framing and picture. No doubt there are photo boffs reading this and laughing, but for a cheap simple set-up, it does the trick.

And no I am not including the several outcuts of me juggling a bream at 6.30am for your amusement, they are getting sent to ‘You’ve been framed’.

← Sligo Salmon
In Search of a Seven →